No acepto Acepto
Para poder continuar debe aceptar nuestra Política de privacidad.
Aceptar
Cancelar
Lopesan present in the debate on the economy collaborative and the opportunities of business in the OVB-2016 | Think In Innovation by Lopesan Skip to content

Oscar Herrera, systems and communications of the Lopesan Group corporate director, has moderated the Panel discussion on the collaborative economy and new business opportunities within the tourism field during the celebration of Overbooking Gran Canaria 2016, the II National Forum of tourism communication, which took place today in the premises of Infecar, in Las Palmas de Gran Canaria.

During the table debate, in which participated Veronica Rosselló, head of relations public and communication of Hundredrooms, Carlos Ortiz, CEO of Worktel, and Alexis Gonzalez, CEO of Farra Produccionesorktel, Herrera raised issues related with the coexistence of the technology digital in them companies in which work, them preferences and trends of them millennials or the economy collaborative as possible threatens for them business traditional.

As head of the systems and communications, it also used to highlight the importance that has the innovation and creativity for the hotel group and its growth, citing the development of original projects Think competition in Innovation, which celebrates already its 5th Edition and which encourages workers, customers, University and other companies to develop creative ideas , many of them linked to the technology, to improve the sector tourism. 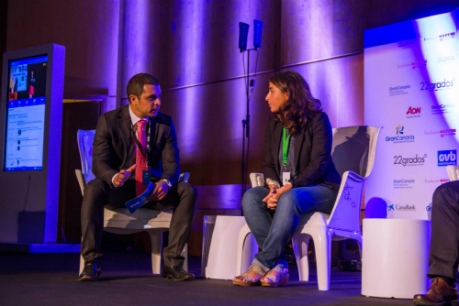